The chart below gives information about global sales of games software, CDs and DVD or video. Summarise the information by selecting and reporting the main features, and make comparisons where relevant. 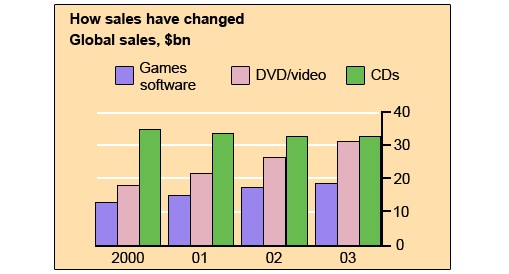 Sample Answer of The Chart Below Gives Information About Global Sales of Games Software, C Ds and Dvd or Video

Overall, it shows that games software was approximately$10bn in 2000, but kept increasing gradually until it reached approximately$20bn in 2003. On the other hand, in 2000 DVD video sales was dropped sharply then kept on rising significantly throughout the subsequent years till 2003 where it almost at the peak of $30bn.

On the other hand, in 2000 CDs was at the peak of $35bn; which kept dropped each year drastically till 2003 where it is approximately $30bn.