The chart below shows the top ten countries with the highest spending on travel in 2018. Summarise the information by selecting and reporting the main features, and make comparisons where relevant. 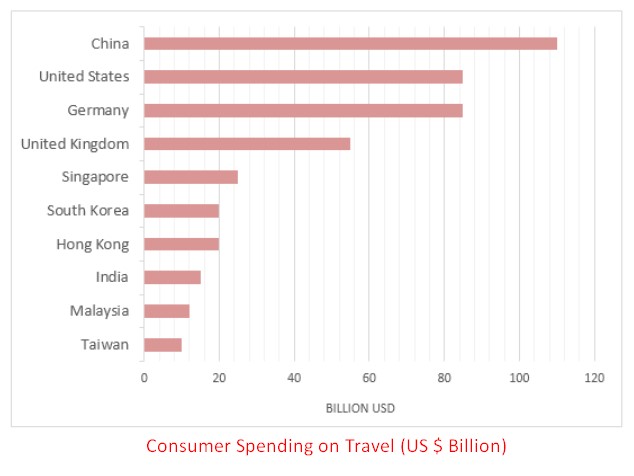 The horizontal bar graph illustrated the ten highest countries’ expenditure in 2018. It also shows the amount of money spent by the citizens on travel in a particular country.

Overall, it is clear from the graph that China stood at first position whereas Taiwan was in the tenth position in the given year.

According to the graph, Chinese people had spent around 110 billion dollars on traveling, which was the highest among the given countries. Besides this, the US travel cost in that period was 80USD billion, and the same amount was shared by Germany. United Kingdom travel cost was half of China, which was 55 billion. Singaporeans had spent over a fold( 23 billion) of USD on trips.

The rest of the five countries’ cost of traveling was less than 20 billion. Hong Kong and South Korea had spent the same ( 20 billion ) amount of money on traveling. Apart from these, the graph shows that the countries like India, Malaysia, and Taiwan outgoings go on decreasing consecutively. At last, very little spent was recorded by the country Taiwan, which was around 1000 million.